After discovering that the first officer on a Virgin flight to New York had not finished his training, the captain was forced to return to Heathrow.

After the co-pilot acknowledged he hadn’t passed his last flying test, a Virgin Atlantic flight bound for New York was forced to return to London Heathrow.

When the captain discovered that the first officer’s training had not been completed, the plane was flying over Ireland. The Airbus A330 was told to return to Heathrow just 40 minutes into its trip.

After the jet – which can transport over 300 passengers – was forced to wait on the tarmac while a qualified pilot was found, passengers arrived in the United States roughly three hours later than planned. 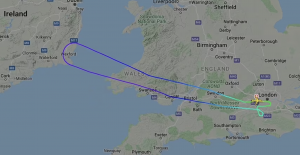 The airline apologized and explained that the problem was caused by a rota error. Passengers were also informed that their safety had not been jeopardized, as both pilots were fully licensed and qualified to fly the plane.

But a source told The Sun: ‘You could have cut the tension in the cockpit with a knife. The plane got as far as Ireland and then they found out the first officer was still in training.

‘The skipper had no choice but to go back to Heathrow and find a more experienced member of the crew. It was embarrassing for everyone and the passengers were furious.’

To fly in accordance with Virgin Atlantic rules, the co-pilot required a “final evaluation flight” with a training captain. His role as the first officer meant he was responsible for maintaining the safety of the flight.

First officers are trained pilots who assist the captain in communicating with air traffic control and operating the plane.

While the pilot pairing did not violate any aviation or safety standards, it did not adhere to Virgin Atlantic’s internal training protocols, which resulted in the flight being turned back.

A Virgin Atlantic spokesman told MailOnline: ‘Due to a rostering error, flight VS3 from London Heathrow to New York-JFK returned to Heathrow on Monday, May 2 shortly after take-off.

‘The qualified first officer, who was flying alongside an experienced captain, was replaced with a new pilot to ensure full compliance with Virgin Atlantic’s training protocols, which exceed industry standards.

‘We apologize for any inconvenience caused to our customers who arrived two hours, 40 minutes later than scheduled as a result of the crew change.’

According to sources, the plane’s captain had been with Virgin Atlantic for 17 years and had logged thousands of hours in the air.

The first officer had joined in 2017, having been trained, fully licensed, and fully type-rated in compliance with UK standards, but was still awaiting a Virgin Atlantic ‘final evaluation’ flight.

According to sources, Virgin Atlantic has now examined and improved its internal systems in order to avoid a repeat of the incident.

A Civil Aviation Authority spokesman said: ‘Virgin Atlantic has made us aware of the incident. Both pilots were suitably licensed and qualified to undertake the flight.’

An individual must have an aircraft type rating and a valid license proficiency check to fly the aircraft, which the first officer did.

A pilot can legally and safely operate the aircraft in any geographical location throughout the world with the type rating and license competence check.

Virgin Atlantic creates a line training program, and the first eight flights are used to practice these processes.

The ‘final evaluation flight’ is a Virgin Atlantic obligation to confirm that the employee follows the company’s specified process.

After completing a full simulator and classroom training program, the staff member in question was recommended as ready for his final evaluation trip on their previous flight, having completed 12 recent flights on the A330.

As a result, he was considered safe and competent to fly the plane, but the decision to return the plane to Heathrow was taken due to Virgin’s internal compliance rules.

December 1, 2022
Share this ArticleLike this article? Email it to a friend!
Email sent!