Four pilots were fired by Qatar Airways after they parked a plane on the incorrect taxiway, causing it to collide with an airport pole.

The Boeing 777-200F operated by Qatar Airways Cargo collided with a light post at Chicago-O’Hare International Airport (ORD) in the United States, severely damaging its wings.

The incident happened on August 5 as flight QR8141 from Atlanta Hartsfield-Jackson International Airport (ATL) to Chicago was being operated by the aircraft, registration A7-BFH.

The aircraft’s right wing collided with the pole as it was taxiing after touching down on runway 10C. 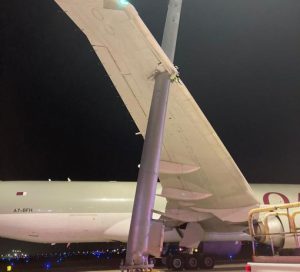 Qatar Airways can confirm that a cargo aircraft, QR8141 operating from Atlanta to Chicago, came into contact with a light post while taxiing at Chicago O’Hare and sustained some damage to the wing,” a Qatar Airways spokesperson told:  “The incident is currently under investigation and we can confirm that no crew members were injured.”

A photo posted on social media demonstrated how the pole sunk deep into the leading edge of the wing.

Passengers Flying With Emirates Airlines Will No Longer Have to Wear...

September 28, 2022
Share this ArticleLike this article? Email it to a friend!
Email sent!