The cabin crew of a Qantas A330 was made to sleep across seats in the economy cabin among customers, with an improvised blanket overhead to block out the light, according to photographs obtained by Australian Aviation.

The photographs, which have been verified, were shot on a long-haul flight from Brisbane to Los Angeles at a time when the airline is dealing with thousands of customer complaints about long call wait times and airport lines.

According to Australian Aviation, the incident arose in part owing to a mechanical fault that prevented the cabin lights from being dimmed at the time, forcing the crew to cover the seats with blankets to block off the light.

Due to COVID-related supply issues, the privacy curtain that separates the resting crew from paying passengers on the flight has yet to be delivered. 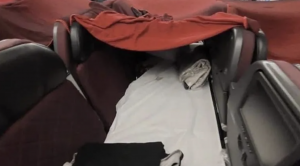 Because the range of its Airbus A330 fleet has been expanded, Qantas has had to remodel the places assigned for its cabin crew to rest and take breaks while in flight, as all aircraft will use this extended range.

The formal crew rest spaces on the Airbus A330 are usually set aside for the four pilots on board, while cabin staff is frequently granted dedicated areas in the passenger cabin to take their breaks.

While personnel can sit in a regular economy seat during their break on standard A330 flights, aviation fatigue management guidelines require the crew to have a lie-flat option during their rest period on extended range A330 operations.

As a result, crew members are now given a mattress to place over a bank of four economy seats so that they can lie down. A privacy curtain would normally be put around these seats in normal circumstances.

Meanwhile, personnel will continue to take their breaks next to passengers in the middle bank of economy seats.

This fact, according to Australian Aviation, has contributed to ongoing tensions between international cabin crew unions and Qantas, resulting in Qantas turning to its New Zealand-based crew to cover Australian flights, primarily the Brisbane – Los Angeles route, which uses the A330’s extended range.

This has been the case since the route began service on April 1, according to Australian Aviation.

In response to rumors that it is transferring more Australian jobs offshore, Qantas blamed cabin crew unions for having to rely on overseas-based employees over its Australian workers in recent weeks.

Early on Tuesday, rumors circulated that Qantas had been utilizing its UK and New Zealand-based crew on international flights instead of its Australian crew, putting many local workers on extended reserve rosters to save money. It was also stated that the airline would soon outsource some of its staff training.

Qantas, on the other hand, has denied that it is outsourcing more employment or that any of these decisions were based on cost.

In recent weeks, Qantas has revealed that it has relied heavily on its New Zealand cabin crew to staff some international flights; however, the airline claims that this is due to continuing contract discussions with its international cabin crew, which have resulted in a deadlock on both sides.

“A small amount of flying is being done by New Zealand-based crew because the union was not prepared to support Australian-based crew working on longer routes with some of our A330 aircraft, including the Brisbane to Los Angeles route, on terms that we were able to agree to,” said Qantas executive manager cabin crew Rachel Yangoyan.

“We wanted to have our Australian-based crew do this flying, but without the union’s support for this to happen, we’ve instead had to use New Zealand-based crew on some of these flights.”

It comes after Qantas applied to the Fair Work Commission in January to have its international cabin crew enterprise agreement completely ripped up due to “unworkable” rostering rules coded into the existing EBA, which limit the types of aircraft that employees can operate on.

The Flight Attendants’ Association of Australia, which is in charge of negotiating the new EBA, responded by saying that while the union has never objected to modifying this portion of the contract, it has objected to other aspects of Qantas proposal.

Qantas’ planned EBA was previously overwhelmingly rejected by the union, with over 97 percent of respondents voting “no.”

The airline also addressed rumors about crew training outsourcing, stating that while it will “temporarily” use other facilities, all training will be handled by the airline’s existing Australian personnel.

“With Qantas’ crew training facilities set to reach capacity as we ramp up our operations, we’ll be temporarily using some additional overseas facilities in the UAE to help increase our training capacity,” Yangoyan said.

“These overseas facilities have specialized equipment that is essential to cabin crew training and all facilities available to us in Australia are at capacity.

“All of our training will be conducted by Qantas Group trainers the same as it is in Australia, we’re simply renting the building and equipment that allows us to get the training done in the timeframe we need.”

August 6, 2022
Share this ArticleLike this article? Email it to a friend!
Email sent!