Incident: A Delta A321 suffered a runway excursion

Officials confirmed that a flight tire on a Delta Air Lines flight arriving in Atlanta on Sunday.

An Airbus A321 (reg. N129DN) was flying from Dallas-Fort Worth International Airport as Delta Flight 1277.

The jet blew out a tire on its right main gear during a landing on runway 09R around 3:40 p.m., according to officials.

“Upon landing at Atlanta Hartsfield-Jackson International Airport, Delta flight 1277 operating from Dallas Fort Worth, experienced a flat tire and the plane came to rest on the taxiway,” a Delta Air Lines spokesperson said.

The plane had to be serviced. According to airline officials, buses were deployed to transport the 172 people to the terminal. 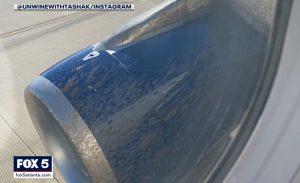 According to the Federal Aviation Administration, “each landing gear has multiple tires and pilots are trained how to safely respond to these situations.”

October 1, 2022
Share this ArticleLike this article? Email it to a friend!
Email sent!