Emirates A380 Lands With Hole Blown Into The Side of Fuselage

An Emirates A380 superjumbo landed at Brisbane International Airport on Friday evening with a large hole blown into the side of its fuselage in an area close to the left-hand wing known as the root fairing.

According to insiders, the damage may have happened during takeoff from Dubai, about 13.5 hours before the plane landed in Australia.

On Friday morning at 2:30 am, the three-year-old A380 departed from Dubai International Airport but continued its flight before the pilots allegedly informed air traffic control in Brisbane that they had possibly experienced a blown tire while taking off and needed emergency services to meet the plane.

The double-deck plane touched down in Brisbane without incident, but it became stuck on the runway. Emergency personnel first saw a large hole blown into the root fairing and “penetration” on the fuselage’s underside. 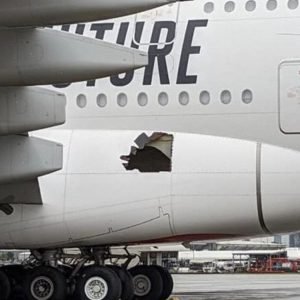 The return trip to Dubai has been delayed while the A380 is still in Brisbane. The approximately three-year-old aircraft (registered as A6-EVK) is painted with a unique “Museum of the Future” livery that honors a brand-new ring-shaped structure on the famous Sheikh Zayed Road in the heart of Dubai.

British Airways Passenger Claims She Found a ‘Dental Implant’ in Her...

United Airlines Pilot Fired For Failing to Get Vaccinated is Now...

December 8, 2022
Share this ArticleLike this article? Email it to a friend!
Email sent!