The new uniform for Kuwait Airways will be introduced in May. The uniform, created by renowned Italian designer Mr. Ettore Billota, highlights the dedication to perfecting every touch point that improves the customer experience. The diamond theme symbolizes the value of the personnel and links to the desert roots. 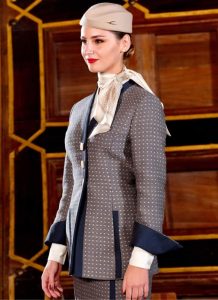 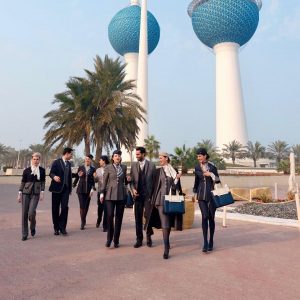 After its owners declared they had hired administrators early on Saturday morning, the British regional airline Flybe has shut down for a second time.

Flybe issued a brief statement explaining that all flights had been canceled and that it had ceased operations immediately. With the collapse of Flybe, the airline brand has now experienced two failures in less than three years.

From Belfast City, Birmingham, and Heathrow Airport, Flybe offered regional routes throughout the United Kingdom as well as to Amsterdam and Geneva. The airline, which had its base at Birmingham Airport, flew a modest fleet of eight Dash 8 Q400 predecessors.

Prior to the pandemic, Flybe was losing about £20 million annually. However, a private partnership including of Virgin Atlantic, the Stobart Group, and Cyrus Capital Partners pledged to invest £100 million in the struggling airline.

However, the pandemic handed Flybe a fatal blow, and the airline announced in March 2020 that it had entered administration. There had been plans in place to rename Flybe as Virgin Connect.

But by October 2020, a business connected to Cyrus Capital revealed plans to revive Flybe, and the new airline was founded the following year. The inaugural flight occurred on April 12, 2022.

The decision to put Flybe into administration was not immediately explained by the company’s new owners, who also delayed any additional information.

“It is always sad to see an airline enter administration and we know that Flybe’s decision to stop trading will be distressing for all of its employees and customers,” commented Paul Smith, Consumer Director at the UK Civil Aviation Authority on Saturday.

“We urge passengers planning to fly with this airline not to go to the airport as all Flybe flights are cancelled,” Smith continued.

A new, multibillion-dollar airline that Saudi Arabia’s sovereign wealth fund is funding in an effort to modernize the Kingdom’s tourist industry and compete with airlines like Emirates and Qatar Airways has suffered a significant setback with the abrupt departure of its new CEO.

Tony Douglas, the former CEO of Etihad Airways, departed Abu Dhabi in October amid rising rumours that the Saudi Public Investment Fund (PIF) was seeking him out to lead a brand-new airline based in Riyadh and known as RIA.

However, unnamed insiders close to the PIF’s inner workings have claimed to Arabian Business that Douglas is no longer working on the initiative. Despite rumours that the wealth fund is ready to spend $30 billion to launch the airline quickly, the PIF has revealed a few specifics regarding RIA.

Douglas has only stated that he is leaving Etihad Airways to “pursue an opportunity elsewhere” and has not publicly addressed claims that he will be in charge of the RIA project. A short time afterwards, Antonoaldo Neves, a former TAP executive and board member, took over for Douglas at the airline.

Douglas oversaw an initiative to drastically reduce expenses and change the airline’s strategy during his time at Etihad in order to return the company to profitability. Despite the pandemic’s significant impacts, Douglas’ strategy was extraordinarily successful, and the airline declared a core operating profit of US $296 million in the first half of 2022.

RIA is an essential component of Saudi Arabia’s long-term modernisation ambitions, which will see the country’s economy change and bring in millions of visitors in the years to come.

The airline will operate from a brand-new airport designed by Foster + Partners, which can carry about 185 million passengers annually. The current national flag carrier, Saudia Airlines, will base most of its operations in Jeddah and cater primarily to travellers doing the Umrah.

The success stories in the region, such Emirates and Qatar Airways, will serve as models for RIA. Male passengers may wear shorts, and alcohol will be offered on board.

Southwest Airlines has begun terminating newly hired flight attendants as they approach the end of their training after deciding to enforce its long-standing restriction on visible tattoos while in uniform more strictly.

Trainee flight attendants were informed that any tattoos on their fingers, hands, face, or neck would result in an immediate release from training in an internal social media post, as reported by View from the Wing.

Even if flight attendants are able to hide their tattoos with makeup, strict enforcement action would still be in place. There have been multiple stories in recent weeks of newly hired flight attendants being fired while still in training.

Airlines are known for their rigid uniform policies, which have historically prohibited flight attendants from wearing tattoos that may be seen while in uniform. However, during the past few years, these regulations have begun to loosen, and Southwest flight attendants had anticipated that their company would follow suit.

Breeze Airways has recently followed United Airlines’ lead by allowing minor tattoos on fingers, sleeves, and even behind the ears. United Airlines was one of the first airlines in the United States to permit certainly visible tattoos in 2022.

In general, though, even airlines that have loosened their tattoo regulations haven’t gone as far as to permit flight attendants to show tattoos on their faces or necks.

An appeal Virgin Australia filed against a court order ordering the airline to rehire a flight attendant who was fired for taking a sleep during a trip and watching a movie when she was supposed to be working was successful.

After a brief investigation into DeVania Blackburn’s behaviour over the course of a month, including on a training flight, the professional flight attendant, who had worked for Virgin Australia for about 14 years, was fired in July 2021.

Blackburn was accused of a series of violations, including stealing four packets of food that were supposed to be distributed during flights and taking a nap and watching a movie on her iPad during the training flight.

In addition, Blackburn was accused of violating Virgin Australia’s tight dress code by neglecting to wear stockings or cosmetics and arriving to work late.

Blackburn filed a complaint with the Fair Work Commission after being fired, and the Commissioner in charge of the case decided last July that Blackburn should be given her job back.

Despite many “strongly worded” negative judgements against the flight attendant, the court found that Blackburn’s termination was “harsh, unfair, and irrational” because of mitigating factors such as her extensive airline experience.

In addition, the Commissioner determined that Blackburn lacked specialised training and said that Virgin Australia had neglected to consider Blackburn’s prior performance or personal circumstances.

Virgin Australia filed an appeal against the verdict, claiming that the Commissioner made a number of errors in her judgement, including ignoring Blackburn’s prior disciplinary warnings.

The airline’s years of Blackburn’s service have not “outweigh the unsatisfactory conduct” an appeals panel has now ruled in favour of Virgin Australia. The court further determined that Blackburn “chose not to comply with the necessary procedures” despite being aware of the expected behaviour during her training flight.