American Airlines has shown the first official images of its revamped interior design, new Premium Economy seat, and Flagship Suite Business Class Seats, which will debut on Boeing 787-9 Dreamliner aircraft due for delivery in 2024.

The majority of the rumors about American Airlines’ long-awaited and eagerly anticipated new Business Class seat have been validated in the company’s official mockups, which were made public on Tuesday.

American Airlines chose the Adient Ascent Business Class seat with privacy doors for its Flagship Suite for its widebody aircraft. Hawaiian Airlines is also anticipated to utilize the highly configurable seat, which is already in use by Qatar Airways on its Boeing 787-9 Dreamliners.

Beginning in 2024, when American Airlines receives brand-new Boeing 787-9 Dreamliners, the seat will initially be installed on its aircraft. The enclosed suites on the Airbus A321XLR, a single-aisle long-range aircraft that may be used for transatlantic flights, will likewise follow the same architectural aesthetic. 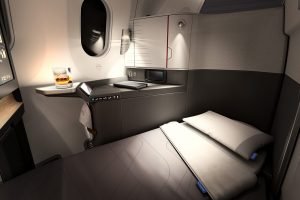 In addition to installing additional premium seating on brand-new aircraft, AA also intends to upgrade its fleet of Boeing 777-300ER aircraft beginning in late 2024. The airline lacks a timetable for when the 20-strong fleet’s repair will be finished.

Passengers Flying With Emirates Airlines Will No Longer Have to Wear...

September 28, 2022
Share this ArticleLike this article? Email it to a friend!
Email sent!