On some of its Boeing 787 Dreamliners, Air New Zealand will install sleep pods, giving customers in Economy Class the chance to experience a totally flat bed for the first time.

The “Skynest” was first introduced in 2020, just a few months before the epidemic, and at the time it was presented as an insane idea or gimmick that most likely would never be implemented in the actual world.

Despite the fact that the pandemic forced Air New Zealand to stop its aircraft for the past two years, the airline continued to develop brand-new cabins for its long-haul aircraft, including the Skynest.

The first Skynest will be installed on the brand-new 787-9 Dreamliners when the flag carrier of New Zealand receives them in 2024. With three bunk beds on either side of a central entryway, the pods will be located near the back of the Economy cabin. 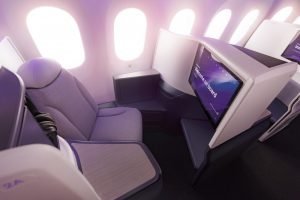 The lie-flat sleeping experience will unfortunately not be an option for many Economy travelers because of the limited number of pods, but Air New Zealand does offer a few other options.

The popular Skycouch from Air New Zealand, which converts a bank of three Economy seats into a new lie-flat bed or adaptable living space, will still be available on the new Dreamliners. Additionally, there are new seats with additional legroom and a Premium Economy cabin.

Additionally, the airline has unveiled its Business Premier Luxe seat, which provides a little more room, a sliding privacy door, and space for two passengers to dine together, for passengers with even larger budgets. 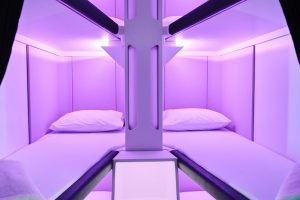 “It’s a proud moment to finally unveil five years of hard mahi, in what truly is a cabin of possibility. One that will provide customers with options to get some shut-eye wherever they’re sitting” commented Air New Zealand chief executive Greg Foran.

“We wanted to offer our Economy customers a lie-flat option and that’s how Skynest was born. It’s going to be a real game-changer for the economy travel experience,” Foran continued.

Leanne Geraghty, the airline’s chief customer officer, said the rooms were inspired by Aotearoa’s distinctiveness despite the airline has provided very few details regarding the seats and cabin.

Geraghty claims that sustainability will be a central theme of the new designs, with a choice to utilize contemporary cloth rather than leather to reduce weight by about one kilogram per Business or Premium Economy seat.

The upgraded cabins will debut in 2024 on brand-new Boeing 787 Dreamliners being delivered, but they will also be retrofitted onto the Dreamliner fleet now owned by Air New Zealand.

The Skynest will only be available on Dreamliners operating the longest Air New Zealand trips; it won’t be installed on all Dreamliners.

August 6, 2022
Share this ArticleLike this article? Email it to a friend!
Email sent!